Home » Blog » DEC » Are DECs achieving what they were set out to?

Are DECs achieving what they were set out to?

“At TEAM we are seeing the ratings for DECs improving year on year.”

Display Energy Certificates (DECs) are currently required for public buildings with a floor area above 1000m2, with the planned amend to DEC policy to buildings over 500m2 scheduled after 2013.

The original objective of DECs was to raise public awareness of public bodies’ energy use and inform visitors to the public buildings about the energy use of that building. What impact is this having on energy efficiency?

An overview of more than 6000 DECs lodged by TEAM during the last 5 years’ indicates that over time the ratings are showing an improvement. A percentage decline in ratings E to G has been growing over time.

Ben comments “Some of these changes could be attributed to the Government withdrawal of the default rating in 2010. This meant going forward consumption data must be provided for the building or buildings. As a result of this policy change, buildings in general have seen an improved rating.

Improved accuracy of the data has seen some building’s rating improve. This shows that by providing a default rating rather than a DEC based on consumption data. The previous DEC may have suggested the building is more energy efficiency than first believed.

Finally, it could be attributed to energy related factors perhaps from the DEC highlighting the energy efficiency of the building. Improved monitoring and targeting of energy use, new technologies and energy efficiency measure could have of course played a part.”

What’s Next for DECs?

Ben tells us “From my experience schools have taken the DECs on board in great spirit, making them part of the education process for pupils. The introduction of DECs seems to have played a role in encouraging the younger generation to think about their energy use and consider the environmental impact of their actions.”

“This then brings hope, with the planned introduction of DECs to properties above 500m2 in the new year, that Facilities Managers, Caretakers and Property Managers will have an increased awareness and tools to improve their energy efficiency that one step further. Being reminded of new technologies and options with regard to reducing their carbon output in the advisory report might be that extra bit of encouragement. I would expect the new regulations to impact significantly upon smaller sized schools, offices, libraries and community centres.”

It has been said that from 9 July 2015 the threshold will drop further to 250m² which would further the impact of DECs and encourage energy efficiency initiatives within smaller sites and organisations. As yet, this change and date have not been confirmed.

In the past we have seen Government consultation concerning the introduction of DECs for Commercial properties. This would see banks, theatres, hotels, supermarkets, shopping centres and more requiring affected. Organisations would require a DEC as well as an EPC. As yet nothing has been confirmed.

Changes to our DECs?

Operational rating classification changes have been loosely discussed. Any changes made would impact on benchmarking changes, where an organisation has measured success levels this may be impacted by classification boundary changes. Particularly as the change would more than likely take effect part way through the 12 month DEC cycle.

“We find that a lot of people don’t know they are required to produce their advisory report on demand, or they could potentially be fined. Since the introduction of DECs, on my visits to sites I have only come across a few organizations who were able to locate a printed copy of their Recommendation Report on request.”

“It is also common to arrive on site and find a DEC located in a staff room or other area of the building without public access. As a DEC is required to be situated in a prominent place, on view for the public, we would encourage organisations to review the location of their DEC”.

How can TEAM Help? 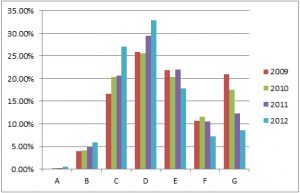 With our team of accredited assessors, TEAM can provide you with an efficient and cost effective service to produce DECs for all your applicable buildings. We will supply you with the completed A3-sized DEC and submit all DECs to the accredited bodies as required under the legislation. In order to do this we will assess your estate, confirm which buildings are covered by the legislation, advise on what information will be required and work with you to complete the exercise.

Find out more about the TEAM Sigma DEC viewer

With our team of consultants and a comprehensive range of energy management
services TEAM are in an ideal position to help you reduce your energy consumption in order to improve your DEC ratings in future.

Meet our Head of Consultancy, Tim Holman,
@TimAtTEAM. Tim leads the #Energy Services team in supporting customers with #energymanagement & #carbonreduction, with 25 years experience in the energy sector & he is also the Chair of
@ESTAEnergy's aM&T: https://bit.ly/3wrjCn4