Home » Blog » DEC » How important are DECs to our schools?

How important are DECs to our schools?

Since the introduction of Display Energy Certificates and Recommendation Reports for all buildings over 1000m2 in October 2008, Schools across the country have invited Energy Assessors (like myself) to carry out surveys for the purpose of ensuring that they are compliant with this UK Legislation.

During the 5+ years that I have been carrying out site visits on schools, I have had many conversations with site managers, caretakers, teachers, council officials and students about the positive benefits DECs can bring to a school. 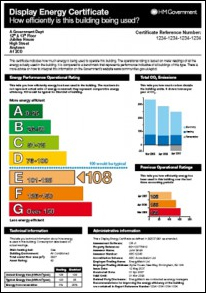 On January 9th 2013, the floor area threshold for DECs was dropped for all public buildings over 1000m2 to include buildings between 500m2 – 999m2. However unlike the DECs for the larger buildings, DECs and Advisory Reports for this new threshold would be valid for 10 years, not 1 year.

Surprisingly, the schools who would fall within this 10 yearly bracket, breathed a sigh of relief at this. Why? With government cuts looming, the last thing small schools wanted to do was pay out for an energy certificate every year that a lot of them saw as a tick box exercise and nothing else.

However, in my opinion and many others who work in this field that I have spoken to, I believe this hasn’t helped schools only hampered them, why? Well first we need to understand the true purpose of a DEC, what does it bring to a public building?

I, like many, see a DEC as a powerful tool in helping building users monitor and reduce their energy use.

DEC ratings in schools: the ups and downs

A DEC allocates an operational rating based on comparing a building’s ‘actual energy use’ (main heating fuel and electricity) with the typical energy use of that building’s benchmark.

The DEC certificate provides the school with an A-G rating which is then prominently displayed as a colour A3 poster for all the public to see. This shows the building users and the public (who visit the school) how that building is performing against other buildings of the same type.

Since 2008 the majority of schools (see Graph) which TEAM has produced DECs for have received a D or better rating (52%). The worst rating has been a G346 and the best an A17.

The majority of these schools have seen improvements in their rating from previous year to current year, with the best site improvements seeing them move from G ratings to E/D ratings. However, a number of sites have seen reversed fortunes, with one school seeing its rating C70 (2009) falling to G176 (2013).

A recent survey carried out by TEAM, highlighted that the majority of schools had valid DECs displayed in prominent places and that school DEC ratings were improving, results of schools opinions suggested otherwise, with more than half of schools’ thought the rating either stayed the same or became worse.

Of the schools with improved ratings, recent steps to monitor and control their energy use were the reasons given for their improvements.

Those who saw their ratings worsen believe that additional computers were to blame; it would be interesting to see if any of these schools have since implemented energy saving methods to counter the increased energy use.

Of those that had copies of their Recommendation Reports, 31% had implemented recommendations based on the report, with ‘photovoltaic panels’ accounting for the majority of actions taken.

Another surprise is that two thirds of schools surveyed see DECs and their associated Recommendation Reports as valuable tools in reducing energy usage and costs.

Prior to the introduction of the new 10 year certificates and government cuts across all public bodies, site managers/bursars have seen the medium/long term benefits of DECs.

Of those surveyed who do not see the DEC as a valuable tool, one third perceive them as an expensive piece of legislation and a tick box for auditing purposes.

I once visited a site which was just over the 1000m2 threshold where the Headmaster informed me he was having a builder come to site to install a brick wall and reduce his floor area to 999m2 to take advantage of the new 10 year certificates, as it worked out cheaper to the school to reduce their floor area rather than pay for ten DEC certificates. I was shocked and suggested to the Headmaster that he could make more savings through monitoring his energy use and a DEC was a powerful way to do this, but he only saw the tick boxes he believed he was being forced to comply with.

With the implementation of Feed in Tariffs (FiTs) and the Renewable Heat Incentive (RHI) it was not surprising to see that a number of schools (51%) had already installed one form of renewable generation. It was also encouraging to see a large proportion of those who had none installed were using the Recommendation Report as evidence towards applying for grants for renewable installations.

However, not all schools which had a renewable or low zero carbon technology installed had the generation recorded on their DECs. The majority of sites did not record regular readings, in order to overcome this readings must be recorded at regular monthly intervals at least.

In 2013 the UK Government had the opportunity to show the world that we are leaders in energy saving legislation.  However with the new 10 year expiry on DECs with a floor area less than 1000m2, public buildings (in particular schools with a floor area less than 1000m2) have breathed a sigh of relief, as they see a dramatic drop in the cost to be compliant, they won’t need to renew their certificates yearly, like some of the bigger schools, they will have a DEC certificate which is based on one years’ worth of consumption valid for 10 years.

What we really need in the UK is public building occupants, such as schools to educate our nation and show how powerful DECs and Recommendation Reports can be. For the small fee of the DEC, the school can show the public how well it is performing year on year, potentially saving energy consumption costs and bringing energy efficiency to the forefront of all school stakeholders minds.

Unless a few schools are willing to set the trend, the DECs in schools will just become another certificate on a wall full of certificates being viewed as nothing more than decorative wallpaper.

Finally in this day of government cuts, where do schools make these cuts? When I was growing up, the cut was my daily milk, nowadays schools look to reduce their staffing levels. By reducing energy use though monitoring and targeting energy consumption a school can save 5% or more. A DEC is a valuable way of showing the public how by reducing energy consumption, you are making your school more efficient and at the same time can be used as an educational tool for your pupils as well.

At TEAM we believe that we are in an ideal place to help building occupiers with the production of DECs and Recommendation Reports. Our team of accredited Energy Assessors have produced more than 9000 certificates for buildings throughout England, Wales and Northern Ireland for councils, emergency services, leisure centres, offices and more.

Meet our Head of Consultancy, Tim Holman,
@TimAtTEAM. Tim leads the #Energy Services team in supporting customers with #energymanagement & #carbonreduction, with 25 years experience in the energy sector & he is also the Chair of
@ESTAEnergy's aM&T: https://bit.ly/3wrjCn4