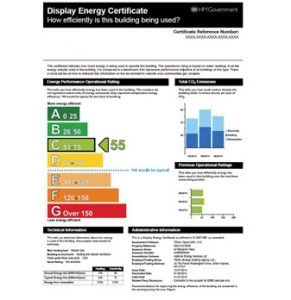 In February this year the Government announced proposals which could see Display Energy Certificates (DECs) for 54,000 public buildings in England and Wales abolished.

The Department of Communities and Local Government (DCLG) said it was considering removing the legal requirement for DECs in public buildings such as town halls, swimming pools and schools – or even abolishing DECs completely.

What’s happened since the General Election?

Since the general election, Eric Pickles has left DCLG and no decisions have been made. Until the new Government announces the outcome of this DEC consultation (including any changes to the legal requirement for DECs) the law stands – and TEAM’s advice is to simply proceed with the regular updating cycle of DECs and Recommendation Reports. We will advise DEC customers when the Government decides.

The proposals have already been met with criticism from both green groups and the industry and a final decision has yet to be made. The Royal Institute of British Architects (RIBA) said the proposals represented a “backwards step”.

“RIBA has long campaigned for mandating Display Energy Certificates, not just for the public sector, but for a wide range of non-domestic buildings. DECs are widely seen as a vital tool in effectively reducing wasted energy in buildings. Increasing numbers of private organisations are embracing the concept on a voluntary basis, as a relatively inexpensive process of gathering information on performance and influencing behaviour.”

“We agree with RIBA wholeheartedly! Even if it wasn’t a mandatory requirement, I’d still recommend a voluntary DEC – unless you have a better alternative to track real energy use and energy costs – do it each and every year – and are motivated to do an assessment of Return on Investment arising from energy-saving measures.”

Since 2008, all public buildings over 1,000m² have been required to have a DEC which shows the energy performance of the building based on its actual annual energy consumption and the CO₂ emissions that result from that energy use. Buildings with a total floor area of between 500m² but below 1,000m² are required to have a DEC every 10 years.

The Government suggests Display Energy Certificates could be abolished on the basis that current regulations may have “gold-plated” EU requirements – i.e. exceeded the requirements of EU legislation when transposing Directives into UK law.

Do you think the goals @COP26 are setting, will be achieved over the next two weeks? #ClimateAction #COP26Glasgow #COP26 🌎