The Government has released its weighty response to the consultation of the Renewable Heat Incentive (RHI): A Reformed Scheme.

TEAM’s RHI Industry Expert Justine Grant explains some of the changes expected to implemented in Spring 2017.

In 2015, the Government announced plans to increase funding for the Renewable Heat Incentive from 2016 to 2017. By 2021 an additional £1.15 billion will have been spent on the RHI.

Whilst most were optimistic about the news on increased funding, many were keen to learn more on plans to reform the scheme and what it will actually mean.

Luckily, the long-awaited conclusion of the consultation gives us an insight into the impending changes and the RHI’s future. 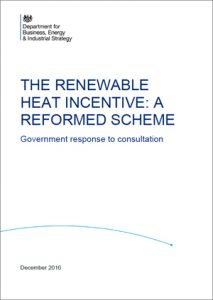 At 116 pages, there is a lot to go through and nearly every aspect of the RHI has been tinkered with. Changes are expected to come into effect this Spring and are intended to provide the level of certainty needed for consumers and industry to invest in renewable heating.

With such a diverse response that tackles such things as budget management, capping payments for larger homes, forcing a change to biogas feedstock, tariff changes and removing eligible uses, I think this needs to be diced into bite size chunks.

For anyone planning a Biogas Anaerobic Digestion (AD) plant – note that there will be changes in relation to sustainability of feedstocks and eligible uses.

The reforms will limit the RHI payments for biogas and biomethane not derived from wastes and residues to 50% of the total biogas yield, this will apply on an annual as opposed to a quarterly basis which will offer some flexibility with feedstock availability and markets. This is to encourage a move away from purpose grown energy crops which can have significant emissions associated with their production.  Biogas technologies, like biomethane production, can and should make use of available feedstocks, such as wastes, to produce low carbon fuels which can be used in a flexible manner.

Another big change for our AD customers, The Government has decided to proceed with the removal of support for heat used to dry digestate. According to the Department for Business, Energy & Industrial Strategy (BEIS), evidence suggested that RHI payments may in fact be causing drying activity which is unnecessary, reducing the quality of digestate for use as a fertiliser, contributing to wider environmental impacts such as the release of ammonia, and overcompensating users.

As with anything RHI, my advice is always to get a move on. BEIS and Ofgem use seasons to describe when changes will be implemented and spring is not that far away.

You should be able to access and download the Government response to the consultation by clicking here.

More about the RHI Scheme…

The RHI provides a continuous income stream for 20 years to any organisation that installs an eligible renewable heating system, ensuring that renewable heat is commercially attractive when compared to fossil fuel alternatives. The scheme is important because it helps significantly increase the level of renewable heat produced in the UK, which is key to the UK meeting its renewable energy targets, reducing carbon emissions, ensuring energy security and helping to build a low carbon economy.

By 2020, it’s estimated that RHI support levels are expected to bring forward around:

These installations are expected to generate 57TWh of renewable heat.

Renewable heat is crucial to the UK’s long-term decarbonisation efforts and the Government believes the technology is almost ready to stand on its own two feet without subsidy.

How can TEAM help?

TEAM’s RHI Support Service can help organisations obtain their RHI tariff payments, which for large buildings, can amount to tens of thousands of pounds per year. Find out more by visiting the RHI Scheme Support Service.

Justine Grant is a Senior Energy Consultant at TEAM and RHI expert. Her expertise lies in IRMAs for RHI applications, Display Energy Certificates as well as Energy Surveys and Audits. Justine is a technical author and trainer and is qualified as a CIBSE certified ESOS Lead Assessor. You can read her biography on the TEAM website here.

Follow Justine on social media for news and information about TEAM’s RHI services.

Did you know that organisations can use ISO 50001 as a route to #ESOS compliance? Our team of #energy experts can support you in complying to the ISO 50001 management standard by establishing the framework & ensuring you meet the requirements. Learn more: https://bit.ly/3MU5mcc